Lessons From the Ultimate Marketing Campaign 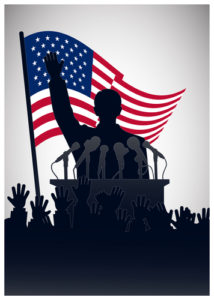 For marketing pro’s who practice their craft with somewhat smaller budgets, it is exciting to watch.  Actually, it’s more than exciting. It’s instructive.  Many of the marketing principles, tactics, and strategies employed by presidential campaigns apply directly to the capital equipment world. From this ultimate marketing campaign, we can cull some important lessons. Here are four.

Be Relentlessly on Message

When you watch a presidential candidate in a debate or an interview, it can be occasionally frustrating. It seems that matter what the question is, the candidate always answers in the context of their campaign’s key messages.

It’s not that the candidates are incapable of handing a broad range of topics. It’s that they know that it is extremely difficult to get their positions to resonate with a voter. The marketing gurus driving presidential campaigns know this. That’s why they pick a few key messages, and then program their candidates to repeat them every chance they get.

Capital equipment marketing is no different.  Your marketing campaigns must be built around the key messages that you want to convey. Those messages must then be cemented in the customer’s mind with relentless repetition. That means that every piece of collateral, every conference talk, every web page, every presentation, and every press release must tie back to your key messages.

It’s Not the Same Message for Every Market Segment

In the case of a presidential campaign, a candidate’s position on farm subsidies isn’t going to resonate in New Jersey, but may dominate the discussion in Iowa.  It’s the same candidate in both cases, but they’re different market segments and therefore different messages are needed.

It’s no different for capital equipment.  The advantages that you emphasize in your key messages depend on who the message is for.   A low labor cost advantage may matter to a buyer in Silicon Valley, but to that buyer in Vietnam it’s probably not a major factor.

You Can Blow It in the Demo

A marketing campaign’s key messages must build the case for buying. Then, the product demonstration must confirm that the key messages are true. Any disconnect between your rhetoric and the product performance witnessed by customer will result in a major setback in your quest for the sale.  That goes for both capital equipment sales and presidential campaigns.

Take the 2012 presidential contest between Barack Obama and Mitt Romney as an example. President Obama’s messaging prior to the first debate painted Romney as un-empathetic member of the more extreme factions of his party. That was the Romney that the electorate expected to see when the candidates faced off.

The problem was that Romney’s debate performance did not match the picture President Obama’s campaign had painted.  As a result, the President was widely seen to have lost that debate (i.e. the demonstration). Immediately after the debate, Mitt Romney’s poll numbers bounced, and the Obama campaign went into recovery mode.

Customers Care More about Their Problems, than Your Products

What the voters want is a President that understands their problems. They are much less interested in the wonky details of his or her budget proposal or foreign policy.

How else can you explain a crowd of college students erupting into applause when the presidential candidate on the stage asserts, “It’s not right that half of college students graduating today can’t find a job!”  The candidate’s statement suggests nothing about the solution. But it does demonstrate an understanding of the problem.

Similarly, capital equipment buyers are much more interested in their problem, than they are about the detailed features of your product. Your marketing messages must first demonstrate that you understand the customer’s problem. Then, they must go on to establish your product as the best solution to that problem.